When these beautifully crafted maps popped into our inbox just in time for St Valentine’s Day, they appealed to our romantic side and we decided to share them with you, in case you fancy splashing out this year.

The only known signed map by Veronese artist Giovanni Cimerlino, the Cosmography Universalis ab Orontino Olim was made for Henry FitzAlan, the Earl of Arundel, who was the godson of Henry VIII and served under Henry VIII, Edward VI, Mary Tudor, and Elizabeth I. The map is valued at £200,000.

Oronce Fine’s double cordiform map of the world, Nova, Et Integra Universi Ornis Descriptio, published in the 16th century, is one of the most striking and influential maps of the world. Valued at £24,000.

This large cordiform modern world map is only the second map in a Ptolemaic atlas to show America, and the first western printed map to indicate Japan. Valued at £80,000.

All maps are available through Daniel Crouch Rare Books. 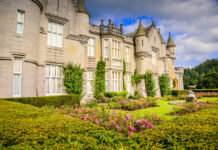